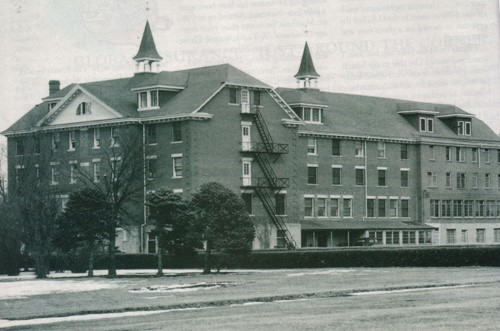 The building in Red Deer that originally served as the Alberta Ladies’ College, and then as a psychiatric hospital for shell-shocked soldiers, was converted into the Provincial Training School for Mental Defectives (PTS).1 The training school cared for people with developmental disabilities, but that involved the forced sterilization of about 2,844 people between 1928 and 1972, as part of Alberta’s eugenics program.2 The PTS saw massive growth in the 1950s; expanding from 293 patients in 1950 to 1433 patients in 19503. This population growth warranted expansion of the PTS, including the addition of three new villas and a woman’s dormitory, overseen by the Medical Superintendent at the time, Dr. L.J leVann.4 In 1973, an attempt to advance deinstitutionalization led to the creation of recreational complexes at the PTS.5 The training school was renamed the Michener centre in 1977 6, and continued to provide care for people with disabilities. Controversy still remains about whether or not the Michener Centre provided exemplary care after the eugenics practices halted 7.

Archives Society Alberta. “An end or a new beginning?”